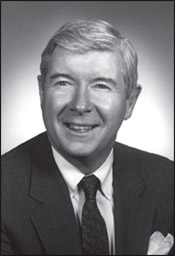 The Providence Society was established in memory of Thomas P. Moore II, who was a founding member and long-time Chair of the Providence Health Foundation Board of Trustees. Tom was a great supporter of the community, having been born and raised in Detroit and spending his professional life in the region. Tom began his career at Detroit Ball Bearing Company in 1959 and retired as Vice President/Secretary of the Invetech Company, which was formerly Detroit Ball Bearing Company. He passed away in January 2005. He is survived by his wife, Beverly, five children, and 10 grandchildren.

Tom was devoted to his family and was a hardworking business executive. He always maintained a great interest in the Detroit business community and was known for his kindness and generosity.

Ascension Providence Hospital is honored to have received such tremendous support from Tom. Because of his leadership, Ascension Providence Foundation is a strong and effective organization. Tom served on many committees at the hospital, including the Committee for Philanthropy, Planned Giving Committee, Care of the Poor Committee, Providence Heart Institute, and the Cancer Task Force, among others. Throughout his lifetime, Tom received many awards for his community dedication including the hospital's Order of Charity Award and Lifetime Achievement in Volunteerism Award.

Ascension Providence Hospital, Southfield Campus, is a 365-bed teaching hospital which traces its roots in the community to 1845 when the Daughters of Charity established its predecessor, St. Vincent’s Hospital, in Detroit. During that astounding history, thousands of people have benefited from the compassionate, caring tradition that became the hospital's hallmark.

The hospital moved from Detroit to Southfield in 1965. In addition to the main hospital, the network now offers outpatient care at more than 20 primary care and specialty care centers.

Ascension Providence Hospital, Novi Campus, opened its doors to patients in 2008 with 200 beds. Now with 264 beds, this “hospital of tomorrow” contains the latest medical technology in an environment that blends comfort and care with scenic views to aid the healing process.

The Daughters of Charity have a long, rich history of serving the community through their dedication to education and the relief of suffering for those poor in health and spirit. Their tireless efforts to help the sick led to the development of what is now Ascension Providence Hospital. The Daughters' founding charter said they would "assist all persons...suffering from any disease or infirmity"...and "establish hospitals for their support, care and relief." To this day, the hospital continues to have compassionate Daughters of Charity present on the two campuses to guide our ministry in serving those most in need.